Employment Tribunal claims still significantly down according to latest statistics from the Ministry of Justice. 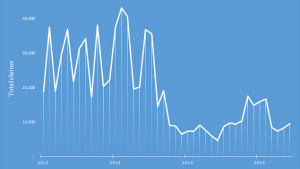 The latest Employment Tribunal statistics show that in the second quarter of 2015 there were a total of 25,290 claims, including multiple claims by more than one individual, compared with 40,962 in the first quarter, representing a fall of 38%. Compared with the same period in 2013, however, before Tribunal fees were introduced, this represents a 67% reduction in the number of claims.

The number of sex discrimination claims from April 2015 to June 2015 fell by 87% compared with the same period in 2013; claims for unauthorised deduction of wages fell by 64%; equal pay claims fell by 70%; and breach of contract claims from employees fell by 66%.

Official figures were also released for the number of tribunal fees paid in the first quarter of 2015. A total of 5,412 fees were requested by the courts, of which 3,686 fees were paid. There were 2,255 remission applications, of which 1,145 (51%) were awarded, either fully or partially.

In June, the Government announced a review of tribunal fees, the results of which are expected later this year. In August Unison lost its latest bid for a judicial review of fees in the Court of Appeal. Unison argues that the fees, of up to £1,200 per claimant, are responsible for the sharp decline in the number of Tribunal cases. Unison has vowed to continue the fight, however, and intends to appeal to the Supreme Court.

The fees regime has clearly had a significant impact on the number of claims. The Scottish Government has already announced its intention to abolish Employment Tribunal fees. It remains to be seen what the outcome of the Government’s review will be, however, and whether the Supreme Court will take a different view on Unison’s challenge to the fees system.

For advice on any aspect of Employment Tribunal claims, contact Helen Kay on or .